Introducing the latest in industrial, small engine performance, the Wildcat 223cc Engine. There are easily half a dozen 212 engines that have flooded the small industrial and power equipment market. The variety of engines have made it difficult to choose what platform is the best when they are the same in size and share similar components. We made a choice much easier; rather than another 212; why not try a bigger 223cc engine? "No replacement for displacement." Ask any hot rodder, and they will agree. There are two foundations for making more power, more displacement or more rpm. As RPMs increase and the engine can be built or modified to remain efficient, it can continue to make power. Since most industrial engines are governed, increasing RPMs is restricted. If the engine is used for racing applications, the governor removed; some of the best-built engines do not run over 10,000 RPMs. By increasing displacement, not only does it make more torque and more power than a 212cc engine out of the box, it has more potential when modified. Crankshaft. The way the Wildcat makes 223cc is due to the crankshaft stroke. The Wildcat has a 70mm bore just like the 212 engines but features a 2.283" stroke crankshaft. How does this compare to other engines? The GX200 or 196 Clones have 2.125." The Predator, Ducar, and Tillotson 212 have 2.165" or +.040." The 56mm aftermarket cranks are 2.204 or +.080." The WildCat is 2.283" or + .160" The ARC Billet Crankshaft that can be used in any of these engines is 2.300" or +.175. The WildCat is closer in stroke to the ARC crank, only .017", that it is to the 212 or even the aftermarket 56mm(+.080) crankshaft. If you ever wanted to stroke your Predator but could never afford the cost of a Billet crank, the Wildcat is your solution. But it doesn't stop at crankshaft stroke. Power. The Wildcat 223's extra stroke adds to the power when compared to other engine's EPA rating. Independent tests may vary on the calibration of the dyno. Honda GX200 5.5hp vs Wildcat 7.5hp is a 35% increase Predator 212 6.5 vs Wildcat 7.5hp is a 15.5% increase Tillotson 212E 7hp vs Wildcat 7.5hp is a 7% increase Duromax XP7HPE 7hp vs Wildcat 7.5hp 7% increase Strength. If there is somewhere, the Predator or many other 212 engines can improve its block strength. The Wildcat has a reinforced block that is stronger than the Predator and many other 212 engines. The Wildcat blocks are capable of handling up to stage 4 kits when properly assembled, and many builds that go beyond what stage 4 kits offer. 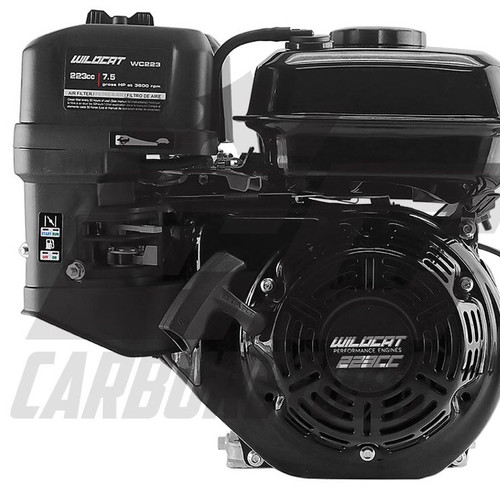